skip to main | skip to sidebar

Generation online has posted the entirety of its issue devoted to the Italian autonomist group Autonomia and the Italian events of the 1970s. The scans are really poor (are all of them upside down?), but there's probably some interesting reading in here. 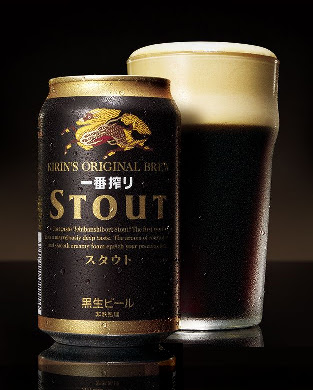 Kirin Stout is the latest dark beer from the Kirin breweries. A carmel, roasted taste that's easy to drink. Hard to find even in Japan it seems that this beer has become more available this winter, which has contributed to my public drunkenness on several occasions.
Posted by sphinx at 8:15 AM 1 comment: 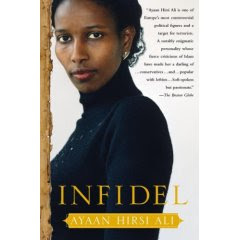 "Infidel" is the autobiography of Ayaan Hirsi Ali, the by-now famous critic of Islam and former Dutch parliamentarian. Ayaan's story begins in Somalia, her country of origin, where she describes the gradual creep of Islamic influence in the context of that country's deterioration into multi-sided civil conflict, resulting from the collapse of Siad Barre's Soviet-backed dictatorship. Ayaan's father is a member of the Somalia Salvation Democratic Front and for this reason she and her family at points find themselves in exile from the civil war as it unfolds. From Ethiopia to Saudi Arabia to Kenya, her humanity develops amongst the very different social systems of four different countries. Initially compliant to her mother's efforts to school her in the teachings of the prophet, Ayaan becomes a devout believer in Islam, donning a dark black robe and later a hidjab after her marriage to a clansman. However, it is the repeated brutality that she is subjected to by devout believers that leads her to question her faith, and ultimately her life in Somalia and her clan. Ayaan is excised, a brutal traditional ritual that involves severing the clitoris of a young girl and then sewing up her vagina. She is beaten by a local Islamic imam whose teachings she questions. She sees her marriage, which is arranged by her father and his clan, as a cage from which she must escape. It is this marriage that provides her with the opportunity to escape her life as a Somali exile.

Ayaan becomes a refugee in Holland by exiting the airport in Germany where she is changing planes on the way to meet her husband-to-be. She is placed in a refugee camp, where her knowledge of English enables her to quickly become an interpreter valuable to both the Somali immigrants at the camp and the camp administration. This helps her win citizenship in Holland, where she begins her life anew, away from the coercion and bondage of her clan and the Islamic strictures. Here she begins to reflect upon not only the control she has been subjected to but also the teachings of the Quran and the hadith which shape her everyday behavior and are interwoven with the domination she experiences. She becomes an interpreter for abortion clinics and battered womens' shelters and gradually sheds her Islamic traditions. Quickly though, her past catches up to her. Her suitor who she had abandoned is searching for her, and her father manages to contact her by telephone. The message is clear: you must return to your husband and join him in Canada. Ayaan refuses, and manages to convince her arranged husband and her father that she will not return, all while finding a way for the clan to save face. Divorce would not have been so simple in Somalia, but for now she is safe in Holland, and she enrolls in university to study political science.

She describes her life as an immigrant in a series of discoveries; marveling at the function of a democratic state without a basis in religious law, praising her roommates' "sense of self". She writes: "In my childhood, the self was ignored. You pretended to be obedient, good and pious for the approval of others; you never sought to express yourself. Here people sought their own pleasure, just because they felt like it." She observes the slowly growing discordance of fellow muslim immigrants in Holland, and witnesses the complete mental breakdown of her sister Haweya who has come to live with her. "Haweya was not made mentally ill by Islam. Her delusions were religious, but it would be dishonest to say they were Islam's fault. She went to the Quran seeking peace of mind, but the unrest inside her was chemical. I think perhaps it had something to do with the limitlessness of Holland; she used to say it was like being in a room without walls. One time she told me, 'I was so used to fighting with everybody for every little thing, and suddenly there is nothing to fight for- everything is possible.' In Europe, Haweya lost her road map, and the lack of guidance became unbearable."

After returning to Kenya and re-entering Somali exile life, Haweya loses her life during a miscarriage.

It is the discord that Haweya experienced which begins to riven Dutch politics. Commentator Paul Scheffer took up this theme in 2000 in a widely debated article: "The Multicultural Drama" which ran in the NRC Handelsblad, a leading Dutch newspaper. "Scheffer said a new ethnic underclass of immigrants had formed, and it was much too insular, rejecting the values that knit together Dutch society and creating new, damaging social divisions...Scheffer said there was no place in Holland for a culture that rejected the separation of church and state and denied rights to women and homosexuals." Ayaan joins this debate when she polemicises against a 'community leader' Imam who defends an incident in which Moroccan youth harassed gay schoolteachers by saying 'Homosexuality is a contagious disease that could infect schoolchildren. It is a threat to humanity.' She responds: "...this attitude was much larger than just one imam: it was systemic in Islam, because this was a religion that had never gone through a process of Enlightenment that would lead people to question its rigid approach."

But it is the events of September 11th, 2001 that force Ayaan to question what remains in her of her faith. "I didn't want to do it, but I had to: I picked up the Quran and the hadith and started looking through them, to check. I hated to do it, because I knew that I would find Bin Laden's quotations in there, and I didn't want to question God's word. But I need to ask: Did the 9/11 attacks stem from true belief in true Islam? And if so, what did I think about Islam?" Her subsequent birth into Dutch political debate leads her into confrontation with the labor party she has begun to work for. They are initially nervous about offending 'community leaders', although they eventually back her right to free speech. She appears with other Islamic dissidents in televised debates, although she stands out enough to begin attracting death threats. Perhaps it is that she is no longer just asking questions, she has begun negating Islam as a social narrative, questioning its precepts, referring to the Quran as a historical interpretation, noting how the Quran's teachings justify the beating of women and cause people in the community to look the other way. After appearing on multiple television debates, her life comes under threat sufficiently that the Dutch secret service are deployed to protect her.

It is at this point that Ayaan makes the decision to leave Labor and join the Liberal party (VVD) in favor of their defense of individual liberty. She criticizes the labor party as being "blinded by multiculturalism, overwhelmed by the imperative to be sensitive and respectful of immigrant culture, defending the moral relativists." This decision puts her however on problematic ground. She makes her appeal to the Liberal party barons, saying:

"...that I wanted to address the issues of immigrant women, especially Muslims, and explained how I thought that affected business... If girls and women are uneducated, oppressed, and psychologically demeaned, then their children are all stunted by their ignorance. If women are well-educated and nurtured, they and their children make up a self-reliant, responsible citizenry and productive workforce."

Ayaan's decision places her enlightenment credentials in the jaws of a neo-liberalism that is dedicated to wearing away at classic working class gains. Although initially she describes her parliamentary ambitions as limited by her desire to be a 'one-issue candidate', this transition requires a confrontation not only with Islamists but also the majority Christian backing for the VVD who consider the public funding of faith-based education as inviolable. It is also her aversion to Karl Marx, who she describes briefly as the Prophet Muhammad of the USSR, which no doubt contributes to this switch. She is elected as a member of the Liberal bloc to parliament.

But it is her decision to create the 'Submission' project with film-maker Theo Van Gogh, in which passages from the Koran are projected onto a nude woman under a transparent shroud, which will mark her most dangerous exposure as an Islamic dissident, leading to Van Gogh's demise at the knifed hands of a true believer and Ayaan's own prolonged exile from public life, wherein she is ferried from safe house to safe house, to America, to Germany and back, in order to protect her from a multitude of threats. Such dedication by the security services could of course indicate that some people have an agenda in mind for Ayaan, and there is probably an element of truth to this. Still she is informed in 2006 that her security detail can no longer be paid for and she is briefly stripped of Dutch citizenship in a humiliating gesture by the head of the immigration bureau, supposedly for lying on her asylum application. Clearly the Dutch state had come to view her as a burden. Thankfully, those Dutch who at least remember their country as the intellectual birthplace of a Spinoza remember their obligations to present-day heretics and manage to get her citizenship renewed. She is now still Dutch, and has moved to the US in order to work with the American Enterprise Institute.

Ayaan Hirsi Ali's contribution to humanity should be praised. In the dark period where the entire left stood neutral after the events of 9/11, she raised her voice and connected her personal struggle as a dissident with the emancipation struggle of every man and woman living under the sword of Islam. Her thoroughgoing criticism of totalitarianism is of value to a left that has lost its way and drifts towards either ethical delinquency or full-blown collaboration with those that would bury civilization in all of its varied forms. If her words have been recuperated by those on the right in order to justify xenophobia then it is the left which must respond with emancipatory critique and action. And it is the left that must take up the cause of her defense against all the armed gangs that organize to silence her words. In the meantime I can wholeheartedly recommend her autobiography for a unique perspective on the struggle within Islam and the story of one woman's struggle for her own liberty.

Ayaan Hirsi Ali in the New York Times this week: Islam's Silent Moderates
Posted by sphinx at 6:07 AM No comments: